So Otomate officially opened their site for Cupid Parasite today so I decided to give some more background and details on the game itself. I don’t normally translate these, but this whole story is such a fun concept (and what do I have better to do…? haha…ha.).

[Los York ロサンヨーク — is the fictional city where the heroine resides. It’s obviously a play on “New York” and “Los Angeles”. ]

[Cupid Corporation キューピット・コーポレーション — where the heroine works and becomes a bridal adviser for the [Parasite5].

In order to help Los Yorkers find their dreams of a happy marriage, the heroine who is the top bridal adviser, had a secret who she could tell no one–

That secret being… Due to various circumstances involving a fight with her parents, she came to the human world after running away from home as the real cupid!

–At 5 AM in the morning in the president’s office.

“Have these three people married. If you do, you’ll be promoted. You’re our top bridal adviser, so you should be able to do it, right?”

The president of the corporation handed over a list of the five most troublesome members within the company called [Parasite5].

While giving tons of interviews, seminars, and advice, they are to appear on a marriage share house TV program [Parasite House]. While this program serves as a purpose to advertise the company, they’ll also all be living together!?

How will the real cupid deal with these guys!?
Difficult and unpredictable, this Goddess x Romantic Comedy starts now. 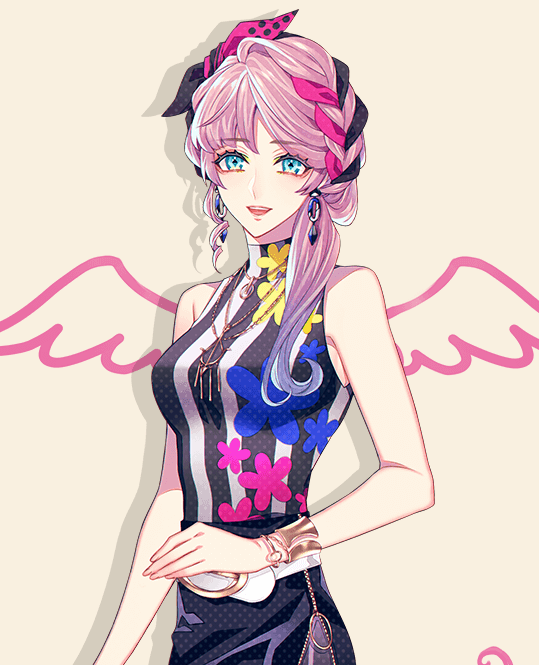 “I can’t just abandon a member in need. My philosophy is a that fateful encounter leads to a wedding. That’s why I won’t stop until I get the job done!”

A top bridal adviser from “Cupid Corporation” and the real goddess of love, Cupid.

Her father, the God known as Mars, had a disagreement on her method of work (how to use cupid arrows). This led to a fight between her and him.

In order to prove her ideals, with the help of her aunt, the goddess Minerva, this go-getter goddess descended to the human world.

Recently her current obsession is to use the small electric current that flows between the horns of her divine beast called “Chi-chan” (who came along with her from the divine world she resided in) as a massage machine.

Personal Thoughts: I am in love w/ the heroine’s design and I’m praying that she’ll have a sprite in the actual game because I bet she’ll have the most adorable emotions. Beyond that, I’m happy she’s an actual Goddess!! 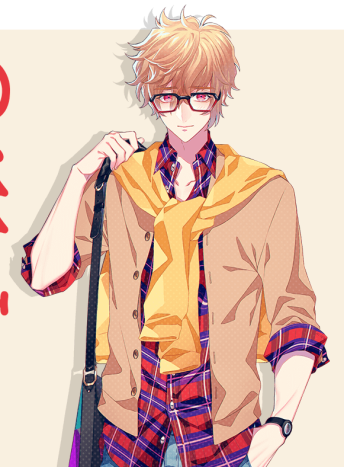 “Haha, it’s been a while. I never thought we’d meet again in a place like this. I came here to try and look forward but there wasn’t a day where I didn’t think about you.”

A freelance editor who is in charge of editing magazines, books and news sites. Two years ago, in order to get over a broken heart, he joined the Cupid Corporation. However, because he compared everything to his unrequited love, he became a troublesome member of [Parasite5].

His unrequited love was a junior in his university days and the heroine who became his roommate. He dedicated himself to supporting her who was ignorant of the world (because she had just come to the human world) and came to like her. But for him who’s feelings went unnoticed, this lead to his heartbreak and decided to no longer be roommates.

This time he is reunited with the heroine as his own adviser and so the gears of love that stopped before have started to move again.

Personal Thoughts: This guy’s back story is both tragic and hilarious?!?? I dont even know what to think. 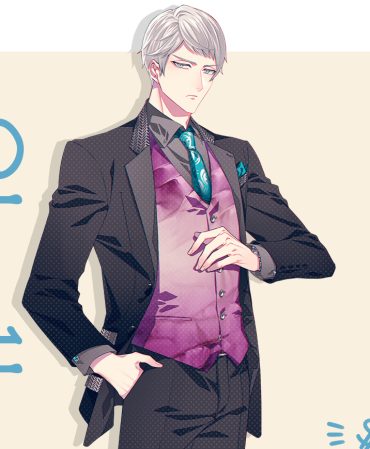 “People only see status. After all, in the end it’s those who have status who are chosen.”

The founder and president of Cupid Corporation. Although he’s widely known for being a devoted husband, he’s actually single.

For consistency purposes, he decides to get married as soon as possible and behind-the-scenes (with wishes to stay anonymous and have a proxy marriage by the secretary) within the company. He offered a proposition for the heroine who boldly stated she wanted a promotion.

While always looking to improve, he has a stoic nature that gives him an advantage in a high rank position. In addition to adapting to his work-oriented lifestyle, he has a side of him that believes that feelings of love are illogical.

Personal Thoughts: It’s weird to see KENN with a role like this… I’m so used to his genki roles rn. But this guy sounds like your typical marketing man who whispers to you in your sleep “marketing > love” ((i get vibes from the twin oniisan in Variable Barriacde)). But in the end you know this guy is gonna want to bang you on your desk no lies.

“Hello!~ Your necklace is so cute. Is that a cupid arrow motif? So, what are your thoughts of cupid being a favorite motif for women?”

A movie star who is very popular with the ladies. Known for his good looks and has become a hit in his action movie roles.

With the decision to appear in his first romance films, his company was worried with whether or not he could make his acting look “real”, so he joined the Cupid Corporation in order to study love.

After an experience of being saved by a God, he became immersed in mythological research which has become his hobby and now it’s all he can talk about it. Thanks to that he can’t hold a proper conversation with anyone and thus became a member of [Parasite5].

Personal Thoughts: Well, since he’s supposed to be a mythological enthusiast I’m gonna assume when he finds out the heroine is ACTUALLY CUPID he’s gonna shit his pants. His shirt is interesting… dunno what to make out of that.

Due to his older sister’s marriage through the Cupid Corporation, he was forced to join as a member. Because of this, his attentiveness of marriage is very low while his attentiveness in fashion is super high. He refuses to recognize those with low standards and joined as a member of [Parasite5] because he would not speak with his previous advisers.

He has synesthesia and there times where he’ll only reply with color codes because he can see visible colors with a person or object. He carries around mist to prevent dryness.

Personal Thoughts: Um… excuse me WHY IS THIS MAN’S QUOTE A COLOR CODE??? AND HE CARRIES AROUND MIST?? Idk but man this route is gonna be a ride I stg. 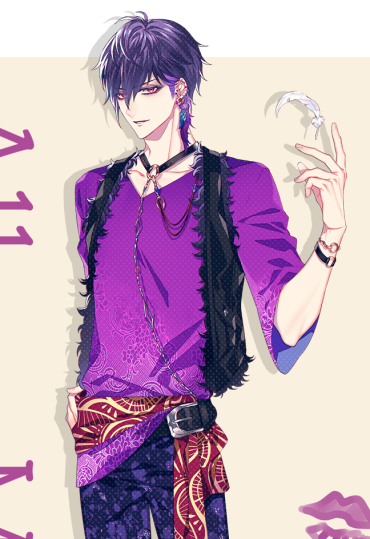 A technician who works at a luxury pillow shop on 9th Ave called “Luxury Pillow”. Custom made pillows tailored to the need of customers and popular with celebrity women looking for a good night’s sleep.

He claims he’s interested in marriage and joined the Cupid Corporation but in reality, he’s a real devil–an Incubus, to be exact. It’s unclear as to why he’s trying out matchmaking and perhaps he may have some other purpose…?

“I’ll give you sweet dreams tonight”, while urging to the staff and female members who already had lovers or potential ones, he became a problem and joined as a member of the troublesome [Parasite5].

Well, there you have it. Honestly, I’m getting both Variable Barricade and Cafe Enchante vibes from this. However, unlike Cafe Enchante this looks more “romance” and “comedy” focused (as mentioned in the description) so I’m gonna assume this is gonna be a wild ride. The setting itself is interesting as its clearly North American inspired and I really like the aesthetic. Then there’s the fact the heroine is literally a Goddess while the rest are human (except for incubus guy I guess) which is a nice change?? I was getting sick of the trope that the guys are all supernatural beings w/ the heroine just being a simple human. I mean yea, Cafe Enchante did it well, but heck yeah I want a heroine is actually the supernatural Goddess here!!

Ok well, I’m looking forward to this and I’ll definitely be playing whenever the hell it comes out. (*´∇｀*)